A few people who travelled to Cambodia told me that the food wasn’t that good especially compared to Vietnam. Going with low expectations but still a bit excited I have to admit, I did like their food. Ok, I haven’t been to Vietnam so I can’t compare but I don’t like comparing anyways ; )

Due to French colonisation back in the days, you will find French architecture, big boulevards, quite a lot of French people, restaurants and this je ne sais quoi, a French something in the country … and french baguette.

It all started with Friends the Restaurant in Phnom Penh which was my mom’s advice. The prices are pretty Western but there is a reason. They are a TREE training restaurant, meaning that they train people who wouldn’t have the possibility like youths who lived

on the street or come from a critical background. Young people who didn’t have the same chances as most of us did. When you spend your money on something you support it, so I am more than happy to spend more money (compared to Cambodian standards) here. And their menu is absolutely amazing!! My cousin and I being the people we are, we completely freaked out and ordered way too much food. There was a burrito or taco bowl which was sooo good. So good, we went back there on our last night in Phnom Penh / Cambodia.

The second day we went to the Killing Fields, on our way out we bought some water and some locals had loads of plastic bags with fruits and veggies in front of them and ate it. Obviously, I had to ask what it was so that I could try it the coming days, if the locals eat it I wanna eat it as well. They just gave me

something to try which turned out to be a green mango with chilli salt on it. Until today I don’t know how this meal or snack was called, even though I bought it a few days later. All I can say is that it was green mangos, pineapple, putrea (fruit) and other fruits or veggies (?!) with spicy dips and a chilli-salt mix. A nice little snack. Pretty sure you will find some ladies sell it on big tablets in the markets.

I love Asia for this, the locals have so little and still share their food.

And some of the best places to get their local food is from street stands or the stands in big markets like the Old Market, the Central Market – Marché Central as well as the Russian Market or the open-air Night Market which is only open from Friday to Sunday from 6pm on.

Markets are just so fascinating, some are rushing around delivering goods, cleaning their fishes, cutting big ice blocks and others rest from their shopping, eat some soup or chat with friends. You can get fresh grilled fish, Kuy Teav, iced tea or coffee you will drink from plastic bags, or a mini pineapple where they cut the seeds out which makes it looks like a piece of art or get creative deciding which fruits you wanna get into your fresh juice. 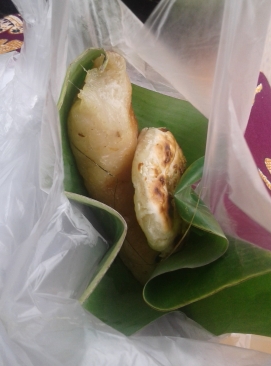 If you like fish and sea fruit as well as rice then you will for sure find something, like Amok which is a meat or fish curry cooked in banana leaves with coconut milk. You can have the Khmer red curry with fish or meat, it features eggplant, green beans, potatoes, fresh coconut milk, lemongrass and kroeung. For the ones who don’t like coconut milk, Fried fish on the fire lake is the whole fish deep-fried which they serve with coconut curry and vegetables like cauliflower and cabbage, and obviously rice or rice noodles. Or try some little spicy mussels with a lot of chilli and salt. Which

is apparently a snack only young women eat?

For breakfast, the locals usually have Nom Banh Chok or also know as Khmer noodles in English.

Seems like they really like their chilli-salt as they gave us some of it when we bought a tangelo (a hybrid of tangerine and pomelo).

Being a big fan of fresh pressed juice, make sure to try their orange juice which you can find a bit everywhere in the streets of Phnom Penh. If they have loads of green oranges laying around you are in the right place. So yes, their oranges are green and taste also a bit sourer than the oranges we have in Europe but these juices are sooooo nice!

On the local street stands you will find freshly grilled food like fish, grilled squid, frogs and stinky cheese. If you want to test out your limits try fried snake, scorpion, insects or tarantula. I was thinking about trying it but people told me it doesn’t have any special taste and the middle is a green-ish slimy something, so I prefer not to. Definitely try insects, they taste like peanuts.

Back to more known food to us; french baguette with chicken or in my case egg instead of meat, lettuce, tomato and La Vache Qui Rie cheese which is just there for the tourist as it is too expensive for the locals.

Battambang; I got positively surprised by Battambang also thanks to our Tuk Tuk driver who knew a lot about the monuments and took us to place where we could see how they make rice paper, heated the palm sugar to put it in little round forms, saw women working on the lotus and actually tried the fresh lotus seeds (I didn’t even know you could eat them) and ate sticky rice out of a bamboo tube. 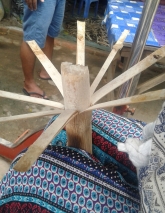 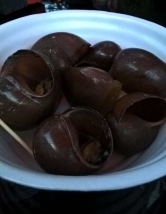 During the late evening, we were at the bat cave watching thousands if not even millions of bats flying out for a night of hunting and I had my eyes on my neighbour’s food, some river snails which I would buy just 10 minutes later.

Luckily there was some celebration the same weekend so there were loads of stands and also food stands on both sides of the river. I got to try some Ang Dtrey-Meuk: spicy grilled squid with cucumber, it was so good that I had to get a second portion of it.

Make sure to stop by at Wood House Restaurant, Street 115 just a few minutes walking from the Psar Nath Market which is next to the Sangkae River. 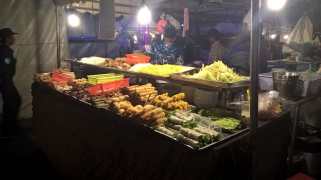 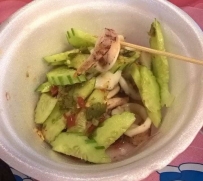 Our last stop was Kampot or actually a little hostel in a fisher village which was located between Kampot and Kep. From there we went to La Plantation where we would learn about pepper and try the delicious salty pancakes Nom Krouk which were served with lettuce, tomato, cucumber, mint, Kampot pepper and dressing. If you have the possibility to try it you should, I did really

Later that day we rented some scooters and went down to the crap market in Kep where we bought some krabs. A young guy cooked us some Kdam Chaa which is freshly fried crab with Kampot pepper, the sauce was absolute heaven. What we didn’t know and confused us a bit was that we had to pay 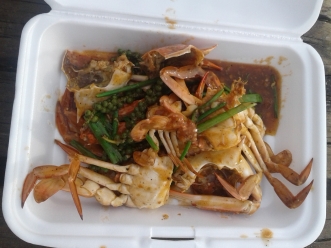 a lady first and then a young man again. It turned out that we had to buy the crabs from her and pay him for the cooking, we just assumed they were working together. At least now you guys know. The Kdam Chaa was one of the best meals I had. Downside; seeing how they killed the crabs just cutting them into pieces while alive.

Obviously there is still so so much more to try, this might not even be 1/4 of their local dishes but unfortunately, I didn’t do any research prior to my trip (not like when I went to Sicily and searched the shit out of the internet). Here some other Cambodian dishes to try: Bai Sach Chrouck (pork and rice), Kuy Teav a soup with rice noodles and pork stocking which they usually have for breakfast,  Lok Lak (Stir-fried beef in brown sauce), Lap Khmer (Lime-marinated Khmer beef salad), Red Tree Ants with Beef, Mee Kiev (Dumpling noodle), Samlor Kako which is a traditional Cambodian soup, Khor a pig stew, Chhar Khnyey a peppered chicken dish, influenced by French crêpes are Banh Chiao which are salty Cambodian styled crêpes.

For the sweet tooth, you will find desserts like Borbo Skor Ta Xuan (Yellow mung bean pudding), rolled banana cake, Cha Houy Teuk which is a jelly dessert I didn’t try as I am not a fan of jelly. As the Cambodian cuisine uses quite often coconut cream or milk it would be kind of surprising not to have any desserts with coconut in there right? Yes! A layered Khmer cake with coconut cream would be Num Chak Kachan or you can try Sangkhia which is a pumpkin-coconut custard. Fruit lovers will find a lot of new fruits to try, they even eat mango and sticky rice as dessert. They do love their rice, don’t they?

Of course, we had some noodles with veggies which we ate in the Tuk Tuk on our way to the airport. So so yummy!

At the end of the day, once you are open to trying different foods, you will find some a bit everywhere.

Find out about my stay in Cambodia in Country of smiles – Cambodia and Siem Reap – Angkor Temples, Monks & Pub Street.

What Cambodian food did you try and love?

Which countries would you recommend for foodies? Find here some of mine like Italy “Do you only travel for food?” – Rome and Oh Sicily, your food is heaven! in Europe or Lets talk food Ecuador.

I would not be me if I wouldn’t get tattoos while travelling, find out what I got in Cambodia in One of my addictions.

14 thoughts on “The food isn’t that bad here – Cambodia”