To clarify we had a toilet but it was a hole in the boat, so everything ended in the ocean. But back to the beginning of it; I was on Gili Trawangan in Indonesia and met a Danish girl who told me about this trip and asked if I would go with her. The boat trip would be from Mataram, Lombok to Labuan Bajo, Flores and stop on some islands like Komodo.

This trip only happened because more and more people told me about it; and also because I didn’t have any plan for the last days of my stay in Indonesia. So a few days later while in Kuta, Lombok I went to book my ticket but without my friend.

Way too early on a Saturday morning, after a night out and breaking my phone screen just 5 minutes before my alarm went off, therefore the alarm went off every 15 minutes during the whole day, I got picked up and we drove to Mataram. A few stops, changing cars and ending up on a motorbike with my big backpack, we finally made it to the Restaurant from where we would go to the boat. Altogether there were about 3 or 4 boats, I ended up on the Mona Lisa along with some French people, a group of British people who were more or less my age, two girls who lived in Australia, a girl from Singapore travelling with a friend. Well, I was the only one travelling on my own, GREAT and what makes it even worst, I didn’t really have a real connection with any one of them. But hey, it is how it is.

Day 1 – Boarding; as no stops were planned for this day it was a perfect way to get used to the boat. Sometime later during the day the crew of the boat stopped and just screamed 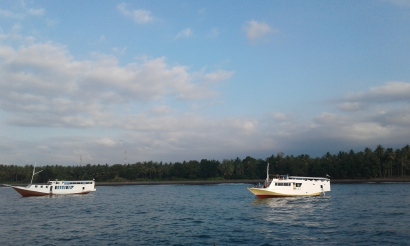 jumpy jumpy! we all looked at each other like, ok what is happening now?! You remember the toilet was just a hole in the boat? Did you expect there to be a shower? Swimming in the ocean is like having a shower. So we did as they told us and jumped from the roof of the boat into the water and it was soooo much fun. Later we got dinner which always includes rice. The night was rough as there was a storm but as I found out; I don’t get seasick even when there is a big storm.  Unlikely most others on the boat.

Day 2 – Islands and snorkelling but first starting the day with banana pancakes. I absolutely love banana pancakes! 30 days in Indonesia and I had banana pancakes every single day. Happy and a tummy full of pancakes we arrived at our first stop, a little fisher village called Pulau Medang (Pulau – Island). A guide was supposed to show us around but the children from the village were already waiting and lead us the way through the village to a beach. 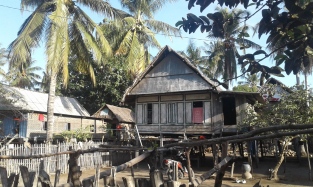 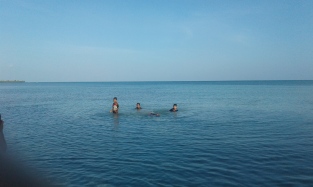 Once back on the boat we would keep on going to end up at the spot where we would snorkel, somewhere around Moyo Island. The water was so incredibly blue, I think I have never seen such a blue in my whole life.

Day 3 – hiking; I was a long day on the boat and eventually, we would stop on Laba Island to hike up the mountain and enjoy the view. After weeks of not wearing proper shoes, I decided against sneakers and for hiking up in flip flops .. Maybe that was not the best idea but I still made it up and let me tell you one thing, the view was incredible!

Not too far away was our next stop, at so-called 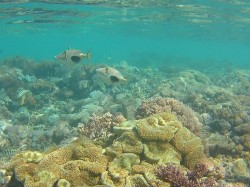 Red Beach. As the name says it already the sand was kind of red due to red corals. We could snorkel our way to the beach and enjoy the corals and observe fishes around the reefs. Let me tell you that it is no good idea to got to close to the fishes as they might feel attacked or so, at least they attacked me ie. a fish bit me

Later that day there was supposed to be a boat party, well, unfortunately, I did not end up on the right boat and it was rather quiet on our boat. At least I got a good sleep.

Day 4 – Komodo dragons & last day; our first stop was Rinca where we had a tour around the island and a guide telling us about Komodo dragons, their habits and their saliva. And we got the chance to see some from close, they are pretty big and seem like a kind of dinosaur. Komodo dragons l 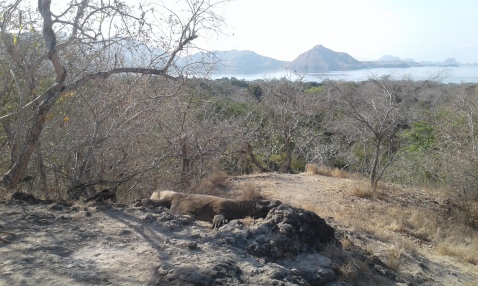 ive alone, they don’t even raise their own children. Actually once these hatch from the egg, they climb onto trees so that their mom or other adult komodos won’t eat them.

We saw two adult komodos, well not fighting but making weird noises at each other and it is kind of scary.

Later we made another stop on Komodo Island to see more Komodo dragons but due to the heat and not feeling that well me and another girl stayed in a little cafe with our guide Mambo. That way we also got the chance to ask him about his life and how he grew up, learning English as a child selling bracelets to tourists at the beach.

I love talking to locals, to find out about their life, the way they grow up and actually realizing how blessed we are in Europe, how many possibilities we have, to get an education, to travel and so much more.

The last stop was Labuanbajo on Flores, this also meant the end of our trip.