In the morning we took a bus to Siem Reap where we would stay 4 nights; Thank God my cousin did agree in not rushing through the temples in one day and in taking a 3-day pass for 62 USD. Yes, it is quite expensive but this will also be the only expensive thing in Cambodia. Once we arrived we also found a Tuk Tuk driver who would drive us during our stay in Siem Reap (don’t ask me how much we paid I can’t remember). As we arrived in the late evening we went to the centre at night where we tried Kuy Teav, it wasn’t the right time of the day to eat it, in The food isn’t that bad here I will tell you why. We did share one dish as we weren’t hungry and didn’t have a lot of cash with us, we did regret that because it was sooooo good we would have eaten a second or even third one. The place we had the food was right next to the famous Pub Street, so we went and had a quick look. To me, it was kind of confusing because of all these bars with loud music, little cocktail stands with even louder music. Thinking of Siem Reap I had more monks, temples and peace in mind. Yet here we were between food stands where you can try insects, scorpion or snake, freshly in front of your eyes prepared fruit ice cream and cocktail stands where you get the drinks by the bucket. 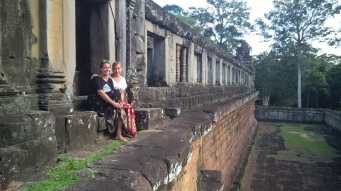 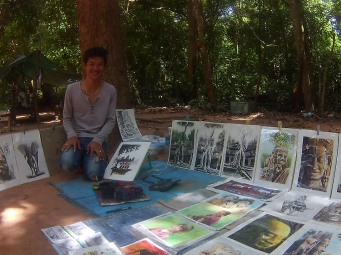 Visiting Angkor Wat; our Tuk Tuk driver came to pick us up and drove us to the place to buy the three days pass for the Temple area. He drove us to the first temple which was located more east and I can not remember the name nor find it online, even though I googled like crazy. Honestly, this mystery temple which was actually quite big, located close to the water, was so so beautiful and I think the best one to start our visit. The great thing about having a local with you who are used to tourists and knows the story and more is sooo handy, after every temple we could ask him questions about statues or other things we just saw. In front of the Banteay Kdei Temple, we talked to a boy who was selling his pictures from temples and got also the chance to ask him a lot of things. We got picked up on the other side of the temple and drove to Angkor Wat which is obviously quite busy. There are a lot of monks in this temple and we knew that we can not just approach them like that but that there are rules, rules we did not know…one monk called us to him, talked a bit to us and blessed us. We still do not know the rules though! From there we would walk to Ta Prohm Kel Temple where we saw baby monkeys playing in a tree, on the way to Phnom Bakheng we took some pictures and a monkey walked through the picture, we got picked up at Baksei Chamkrong Temple and drove to Angkor Thom which was our last stop. 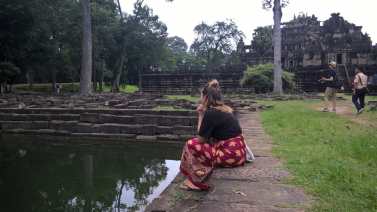 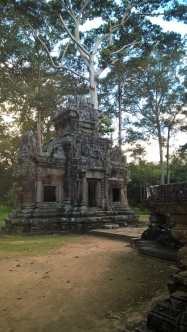 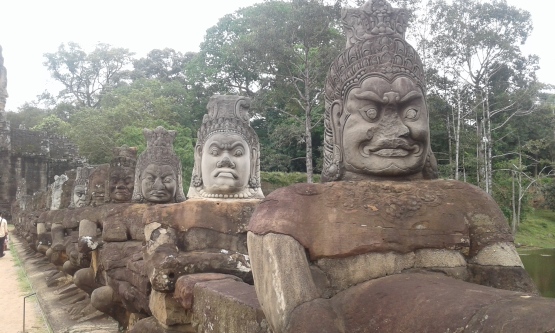 In some more isolated temples, you have younger guys willing to tell you about the story of the temple which will be rewarded with a little donation. We were really lucky to find a guide who was there with a group of artists, he told them a bit about the story of the next temple and then they went on their own to take pictures so he was more or less waiting for them. This man chose the right profession for him because he liked to tell about the temples and the meaning of specific objects. As his clients where luckily busy he gave us a little tour, we asked him about some things we saw in other temples, why some have loads of stairs and others are quite flat. The temples in Angkor were all built by kings, whenever there was a new king he would start a new temple which is also the reason a lot of the temples never got finished. Therefore there are Buddhist and Hindu temples while some are dedicated to a specific God.

We watched the sun rise above the Angkor Temples which felt weird because it was maybe 5 am and yet there were a lot of people walking around the dark temples. The sunrise followed by some baguette with cheese and eggs (the cheese is mainly for tourists as the locals cannot afford it). After having breakfast we went off to explore some temples, some of my favourite ones are the ones which are not too crowded, you can walk around and really feel like you are back in time or in a Lara Croft movie, you decide. 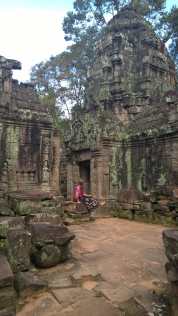 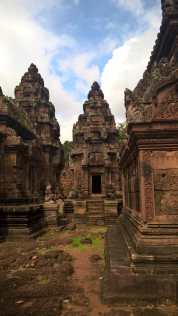 You will see Monks a bit everywhere especially in and around the Angkor Temples, we got told there are some rules about how to behave around and with them. Women can not touch them/they are not allowed to touch women, you can not start a conversation with them e.g. they have to speak to your first, or you should bow while having your palms against each other for three times. I am not sure what is correct or not because everybody told us a bit different things.

Visiting the Angkor Temples as well as Cambodia was amazing, I think everybody should at least once in their life go there! The people are friendly and open (Country of smiles), they like to talk and to show visitors their country, culture and food (The food isn’t that bad here). And take your time to visit the temples, the 3 days pass is just perfect for that.

My perfect kind of souvenirs are tattoos, find out what I got in Cambodia in One of my addictions

While in Siem Reap I bought the book First They Killed My Father by Loung Ung, which you can also find on Netflix!